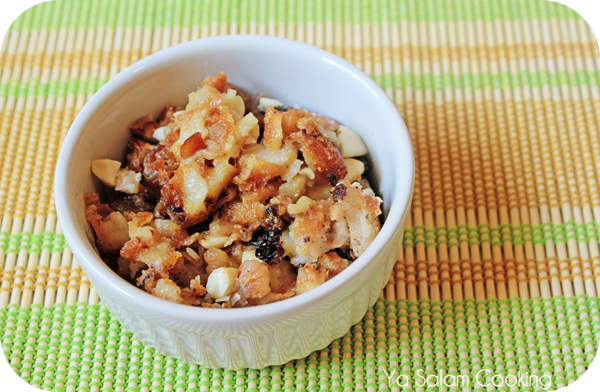 I get asked quite a bit by my readers why I do not have an Umm Ali recipe. Honestly it’s not a recipe that appeals to my husband nor me so I have never cared to make it. My husband bought me some new cookbooks (yes, I am obsessed) for Eid and one of the books that I bought was Sweets of Arabia by Osama El Sayed. He had a recipe for Umm Ali that looked simply amazing. Instead of using the traditional phyllo in the recipe he has used croissants. Umm Ali is a bread pudding type dessert after all so this really turns the recipe around. My house smelled heavenly while it was cooking and I could not wait to dig in. Wow what a difference this recipe makes compared to the other ones that I have tried.

2. In a 4-quart saucepan over medium heat add milk. Bring to a boil. Stir in sugar until dissolved. Remove from heat.

4. Whip cream to soft peak and spread over top. Bake for 20 minutes, then place under broiler for about 5 minutes or until golden. Garnish with chopped nuts and serve hot.

Yumm this looks amazing! Ive always been scared of making Umm Ali something about the phyllo dough scares me but the addition of croissants really changes my mind on this dessert I may just have to give it a try.

Yea you should I never liked the dessert at all until I saw them made this recipe. Now it has won me over :)

From Yeast to Zest said...

Now I feel horrible for tossing those croissants they would give me for breakfast at the hotel, I could have made this. They do the same at dh's work with leftover croissants and puffpastry. Yumm, looks good right about now too bad I'm lazy.

Yea you should try this sometime. I had my dh eat it and then I told him what it was bc he HATES the original UmmAli he was like wow this is awesome what is this lol. He was surprised but this version was just really nice.

From Yeast to Zest said...

Yeah sometimes they make it all soggy and this looks perfect.

Croissants ? wow this is so new to me ! I make it with a speacial thing like puff pastry that is just for umm Ali .
I am sure croissants will make it richer in taste :)

Yea same here and this is the only recipe I ever liked. I hate when its so soggy. You should try it :)

Loooovvvveee Umm Ali! There are many variations of this. I use puff pastry and a milk/heavy cream mix infused with vanilla and cinnamon. I also use slivered almonds,coarsely chopped pistachios, and dried chopped apricots. I'm so happy you found a variation that works for you.

Yes i remember asking you all for a Umm Ali recipe. I had it for the 1st time ever in Kuwait at the Crowne Plaza and it was AMAZING. It was very similar to CHef Osama's recipe. I bought this book for my MIL for EId hehe ( bc it is in English and Arabic). I love his recipes so much. The couple of time I tried it again and different places in Riyadh it was like corn flakes in warm milk and not at all yummy... Its best to make it yourself . :-)

I really love that book as well. My mil and I was going through it together too :).. I like this one much better as well..