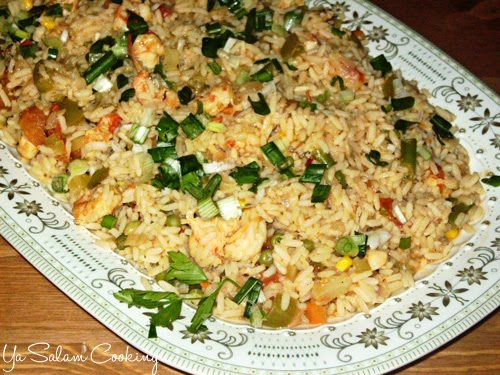 Jambalaya is a Louisiana Creole dish of Spanish and French influence. Jambalaya is traditionally made in three parts, with meats and vegetables, and is completed by adding stock and rice. It is also a close cousin to the saffron colored paella found in Spanish culture. Creole Jambalaya originates from the French Quarter of New Orleans, in the original European sector. It was an attempt by the Spanish to make paella in the New World, where saffron was not readily available due to import costs. Tomatoes became the substitute for saffron. As time went on, French influence became strong in New Orleans, and spices from the Caribbean changed this New World paella into a unique dish. In modern Louisiana, the dish has evolved along a variety of different lines. Creole Jambalaya, or red Jambalaya as it is called by Cajuns, is found primarily in and around New Orleans, where it is simply known as "Jambalaya." Creole Jambalaya includes tomatoes, whereas Cajun Jambalaya does not.

There are many myths about the origin of the name "jambalaya." The most commonly repeated folklore is that the word derives from the combination of the French "jambon" meaning ham, the French article "à la" a contraction of "à la manière de" meaning "in the style of", and "ya", thought to be of West African origin meaning rice.[citation needed] Hence, the dish was named jamb à la ya. European explorers had imported rice from Asia and Africa. Enslaved Africans already had a native name for this crop; they called it "ya". As Europeans learned the term "ya" for rice, it became included in the name of the dish. However, this theory is largely discredited. Ham is not the signature element of the dish, so there is no reason why it would be featured in the name. Furthermore, there is no known African language in which "ya" means "rice." There are two African languages (Mambila and Grusi-Lyela) in which "ya", or a variant on "ya," refers to the grain sorghum. "Rice" is virtually always some form of "riz" or "arroz."

2. In a 4-quart saucepan add rice, broth, Creole seasoning, tomatoes. Worcestershire sauce, tomatoes, peas and shrimp mixture. Raise heat to high and allow to come to a full boil, cover and reduce heat to low. DO NOT uncover even once during cooking time.

3. Cook for 45 minutes. Place Jambalaya onto a serving platter then sprinkle with scallions.

Everyone in New Orleans has a version of jambalaya, but I much prefer the brown version over the red one. I grew up eating both, though. Looks good :)