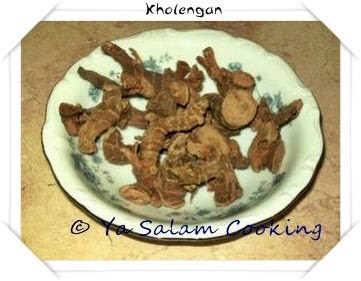 Surprisingly I have had several emails about a spice I use called ‘Kholengan’. Now this is a new one to me as well but one I have passionately fell in love with to say the least. My mother in law (a Saudi) introduced this spice to me and was nice enough to even give me a large supply. This most defiantly is something that I never saw once in the states and we moved around a lot.

This foreign spice looks like a piece of ginger made of wood. I have researched and researched and never found anything until I happened to look into a old Saudi cookbook that I have and the author not only calls the spice ‘kholengan’ but also its original name which is ‘galanqa’ bing we hit the jack pot! After finding that name I was able to research and find the below information. When I smell the spice, it reminds me of a very strong clove smell, almost menthol if you will. The taste well I can not pinpoint it to be able to tell you what to substitute it with as it is so exotic but it gives the food an astonishing taste. If you do not have it do not worry your dish will be fine without it.
recipe index Saudi, spices/sugars
Email ThisBlogThis!Share to TwitterShare to Facebook