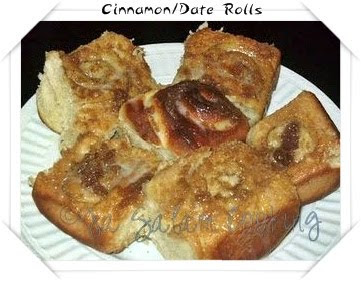 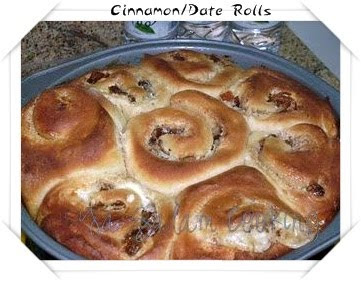 I love cinnamon rolls so much and I have always wanted to make some fresh ones but I was always scared after looking at the recipe so I always ended up just buying some in a can from Wal-mart. Well, their definitely is no Wal-mart here in KSA and no canned cinnamon rolls either so I was forced to make some homemade ones. Hey, I needed something to kick me into gear anyway. I made two batches with different fillings. I froze one for later and we had one that day. If you want to freeze a batch just store it in a freezer bag or any other sealed container. To re-heat simply wrap the rolls in foil and bake for about 20 minutes, they will taste as fresh as when you made them.

1. In a small bowl, dissolve yeast in warm water and set aside. In a large bowl mix milk, sugar, melted butter, salt and eggs. Add two cups of flour and mix until smooth. Add yeast mixture. Mix in remaining flour until dough is easy to handle. Knead dough on lightly floured surface for 5-10 minutes. Place in well-greased bowl and let rise until doubled, usually 1 - 1 1/2 hours.

2. When doubled, punch down dough. Roll out on flour surface into a 15x9 inch rectangle. Spread melted butter all over dough. Mix sugar and cinnamon and sprinkle over buttered dough. Sprinkle with walnuts, pecans, or raisins if desired. Beginning at 15 inch side role up dough and pinch edge together to seal. Cut into 12-15 slices. Coat bottom of baking pan with butter and sprinkle with sugar. Place cinnamon roll slices close together in the pan and let rise until dough is doubled, about 45 minutes. Bake at 350 degrees for about 25-30 minutes or until nicely browned.

I can smell these baking, wish I had them for breakfast!

mmmmm cinnamon buns are so good! and they aren't that much work either. just takes some time and planning. that or put them in the freezer like you did.